A few notes and photos from yesterday...

This was the only day this week we didn't have somehting scheduled! It was just a plain old day...how lovely!

Grayson made a "person" out of his clothes before getting dressed. 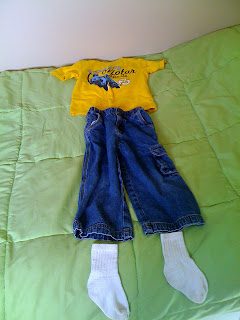 When Sam was down for his morning nap, Grayson and I prepared the Happy Bag for school. What a fun take on show and tell...the child puts an object they want to share in the bag and has to come up with three clues and a word that rhymes with the object to tell the class. Based on this info the class has to guess what is inside. Grayson chose to share a favorite motorcycle toy... 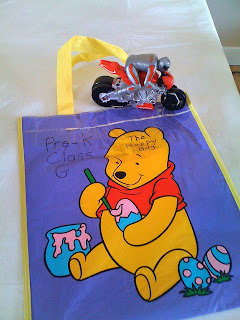 ...and we decided on these clues:

You can ride it.
It has two wheels.
It goes very fast.

And the rhyming words were, "odor" and "recycle". Good job! Grayson wrote the clues as I helped him spell the words. He has really come a long way this year in terms of his writing...he knows all his letters (upper and lover case) as well as his numbers. Writing is slow, but he is keen to do it and surprisingly patient. 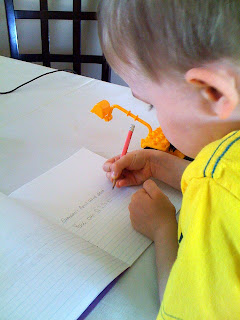 After dropping G. off at school, Sam and I ran a couple of errands, including buying some boxes. What? BUYING boxes? Yes, they are used boxes and the guy will buy them back again from me once I am done! It's an inexpensive way to get heavy duty boxes that are all the same size and stack well. And although they will ultimately be recycled, it's nice to know they will get reused several times before that. 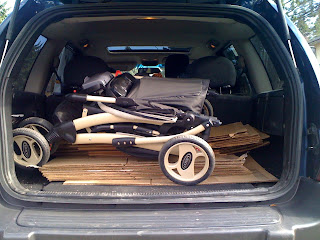 I also picked up the photos from the first part of the week so I can start getting them into the album. 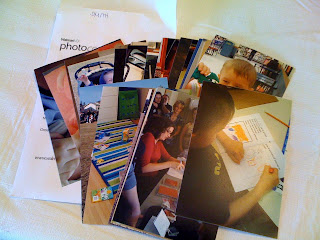 I am so thankful for drive-thrus! I grabbed an iced coffee at Timmy's for me and an apple juice for Sam and off we went to pick up G. When we got home and Sam was down for his PM nap, Grayson and I tackled our Earth Day project - planting some seedlings! What fun! We are not gardeners by any stretch, so this was a bit new for even me! I had purchased a small seed starter and some seeds and hoped for the best. 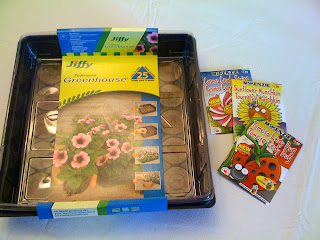 Grayson followed the instrcutions very carefully. First we had to add water to the little discs of compressed peat. 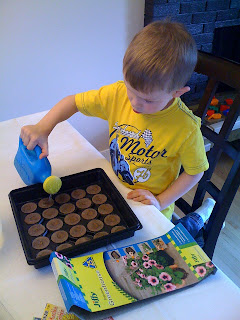 It took a while for them to expand and we had to add more water until they were fully puffed up.Then we broke out the seeds. It was fun to see the different shapes and colors and of course we had to count them. We had Tomato seeds (very little), Sunflower (big and black) and Cosmos (long and skinny). Sam was up by then and was interested too. 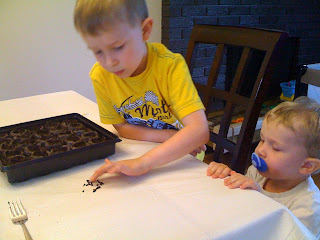 Grayson carefully planted 2 or 3 in each pellet, just as we were supposed to do. 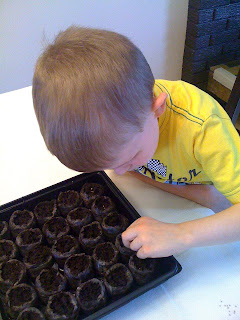 I put the lid on, labelled them and set it on the kitchen counter where it would get the most sun and warmth. We'll be keeping our fingers crossed. Hopefully we'll have a few that take and that we can plant at our new house at the end of May. (May 24 is the official first frost-free date here in Calgary...we are in Zone 3 so most plants have to be super hardy and most annuals can't be planted outide until then.)

Shane was heading out to a dinner meeting, so it was just me and the boys and some Mac & Cheese for supper. Baths and bedtime routine afterwards. I tried to get a photo of Sam and I after baths, but an iPhone is not the best for self-portraits and of course there is no timer. If Shane is home during the next couple of evenings I'd like him to take some better shots of our nightly routine. 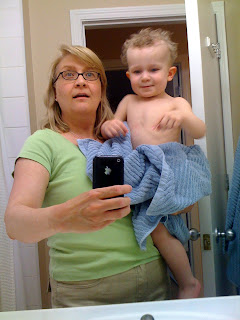 I did get a couple of pics of Sammy settling down for the night: relaxing with his only bottle of the day... 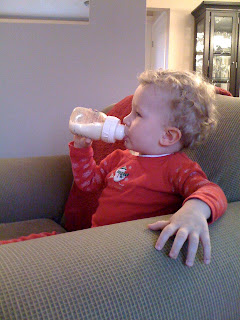 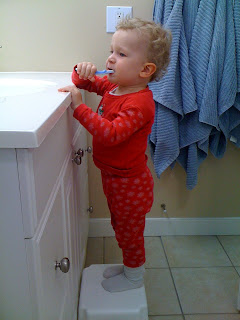 After the boys were in bed, I surfed a little as I am trying to find some quilts or comforters for their new rooms. These will be the rooms they grow up in for the next several years, so I want to abandon the theme bedding and get something that will grow with them.

I am thinking of plaid quilts...coordinating, but in different colors for each boys room. I am liking these from Designer Linen Outlet. 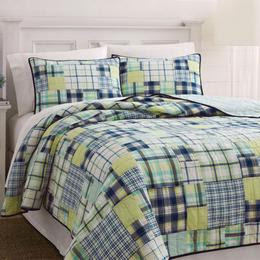 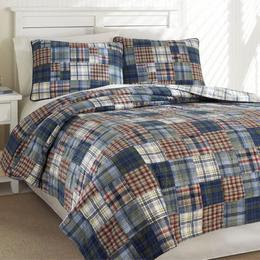 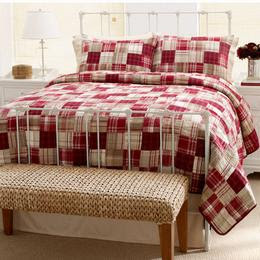 Waddya think? Anyway...surfing for bedding led to more surfing and I didn't get anything else done, which is why I am writing this post the day after. Sheesh!

Email ThisBlogThis!Share to TwitterShare to FacebookShare to Pinterest
Labels: Week in the Life

Oh, planting seeds, what fun! I *love* gardening (not that you're probably surprised, given my blog title ;-)) I hope you have great success with your plants! 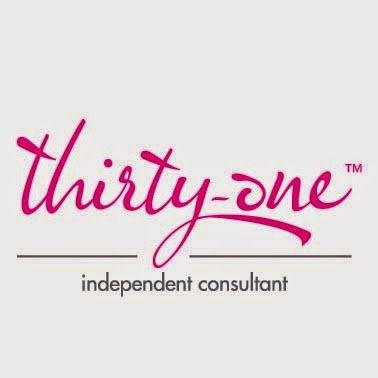